For the first time ever: All star-rated hotels counted.

The amazing number of 386,144 star-rated hotels has been counted in the latest global hospitality study by DELTA CHECK. The sheer size of the number has puzzled even seasoned hotel experts.

The amazing number of 386,144 star-rated hotels has been counted in the latest global hospitality study by DELTA CHECK. The sheer size of the number has puzzled even seasoned hotel experts.

“The big surprise is caused by a simple fact”, Johannes K. Svoboda, GM of DELTA CHECK, explained, “it has been the very first time that star-rated hotels could be counted at all, completely and on a global level.”

He noted that it took three decades of research and development to collect all the hotel data needed to successfully realise the count. In total the data of 2.3 million hotels had to be recorded and processed within “GARD”, the “Global Accommodation Reference Database”, before the counting could be started.

On this background it is no longer a surprise that no any count of star-rated hotels has been available ever. Even worse – numbers had to be guessed, an inadequate situation for one of world’s biggest industries.

“GARD” today is the trusted reference for global hotel data: Universities like Cambridge and Cornell use it as a reliable basis for their scientific studies, while OTAs like “Booking.com” and hotel suppliers like “Customer Alliance” benefit from it by speeding up their growth. 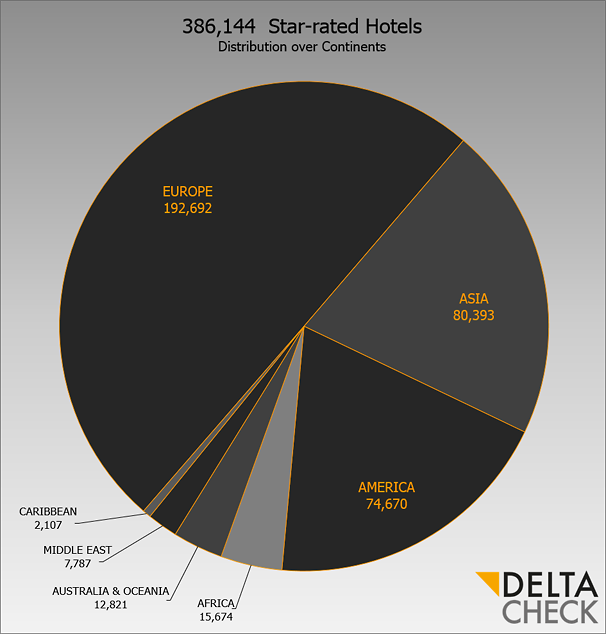 Half of all 386,144 star-rated hotels are located in Europe, followed by Asia (21%) and America (19%) on ranks two and three. Africa, Australia & Oceania, the Middle East and the Caribbean together sum up to 10% of all star-rated hotels. 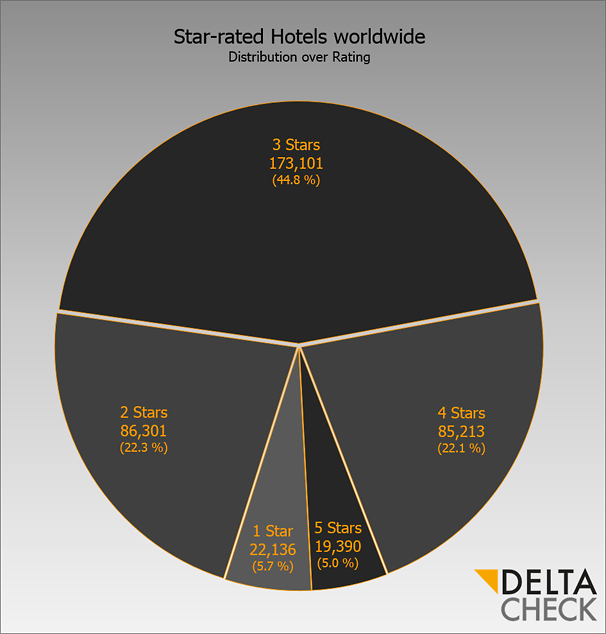 The segmentation of star-rated hotels has a strong symmetrical structure. The biggest segment (midmarket, 3 Stars) already represents 45% of the overall market. Particularly striking is the strong growth of the 5-star luxury segment, counting nearly 20,000 hotels worldwide. The three 7-star hotels are not shown in the chart.

Born in 1955, Johannes K. Svoboda works since nearly three decades within the address- and data-branch. From the very beginning his focus was on hotel data, being part of world’s biggest industry. The outstanding performance of his “Global Accommodation Reference Database” was so overwhelming that he could keep competitors on the long arm for meanwhile nearly three decades.